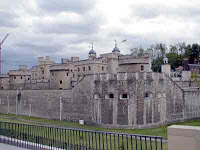 John Gerard was an English Catholic Jesuit priest imprisoned in the time of Queen Elizabeth I, for perceived treachery and treason against Elizabeth's government and reign.

While in the Tower of London, he contrived to send secret messages to another prisoner John Arden. Gerard would write his messages in orange juice on the wrapping paper of parcels he would bribe his gaolers to deliver to Arden. Invisible to the messengers, once warmed by a fire, the messages would appear.

The first time the system was used, Arden was unaware that there were any hidden messages at all, and promptly disposed of the wrappings. Clearly incompatible security expectations.

It was only when the two (through a pantomine of squeezing and writing from their separate regions of the Tower) were able to agree on the encryption algorythm to be used that they were able to organize their escape.

I'm slightly surprised he was English. An Ulster Catholic would have laughed himself fuzzy at the irony of using an orange to plot his escape...

Gerard's chosen fruit was apparently watermelons but, the supply chain not what it is today, this proved impractical.