In a previous life, I dealt with Feynman diagrams, a visual tool of theoretical physics. 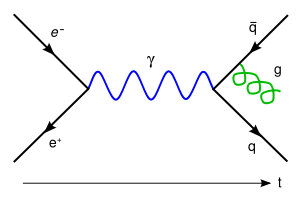 By modelling a particular interaction between sub-atomic particles in this way (straight lines are particles that make up matter, wavy lines are the particles that mediate the forces between the matter particles), and using experimentally determined values for the coupling strengths (e.g. 1/137) of the different vertices between the lines, you would (after alot of horrid math and tracking of 'i's and 'e's), calculate the probability of that interaction occurring.

The above shows two electrons colliding to create a photon which, after a short delay, disappearing with two quarks emerging from the debris (a back of the envelope calculation shows that the probability of the above is 'sometimes').

Now I deal with swimlane diagrams

The math is much easier - the probability of any given interaction occurring isn't determined by fundamental constants but rather by market forces.

And, you don't need billions of dollars to look for them.