I had found Dapper a while ago so I was interested in reading this review from ReadWriteWeb.

I became especially interested when I came across the line

The problem that these applications will face is identity.

Their interpretation of identity is a little different than mine.

How can you know that two movies - one at IMDB.com and another one at Netflix - are actually the same movie?

For myself the identity issue is instead how Dapper supports scraping of data requiring authentication and not publicly available.

Dapper deals with this currently by storing the encrypted passwords used for authentication to various services as cookies on the client, as shown in this screenshot from the Snag application built on Dapper. 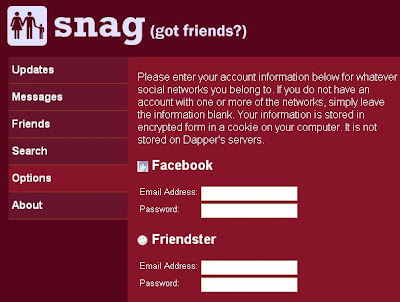